I overheard mention of a particular problem on a recent British Mathematical Olympiad, namely the following:

A number written in base 10 is a string of 3^2013 digit 3s. No other digit appears. Find the highest power of 3 which divides this number.

Personally, I bemoan such problems that are trivialised by the knowledge of advanced theorems, as it enables competitors to gain an unfair advantage by rote-learning many results rather than demonstrating creative mathematical thought. In this case, the question is trivialised by a rather elegant but little-known lemma called lifting the exponent.

So, what does the lemma state? Firstly, we establish the following definition:

Then the lemma is as follows: 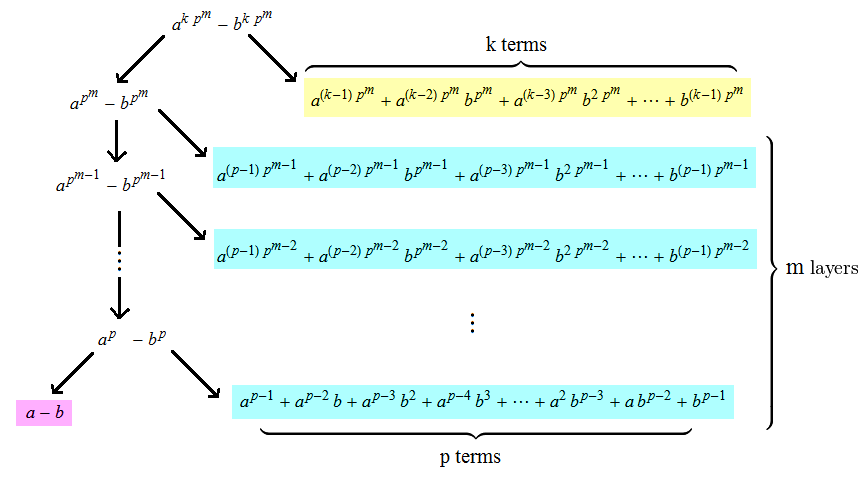 The factors in the final factorisation are highlighted. It is clear that it is sufficient to prove that the yellow factor is coprime to p (which is easy, since all of the terms are congruent modulo p and are non-zero) and each of the blue factors are divisible by p (easy for the same reason) but not by p², as we shall prove:

Then we set y = x + lp for some integer l (which we can do, since y and x are clearly congruent modulo p). Expand the factor Γ to produce a sum of binomial expansions; we can ignore all terms of order p² and higher since we’re only interested in the residue modulo p². This gives the following expression:

The rightmost term vanishes, leaving something that is clearly not divisible by p². Consequently, the proof is complete and the result follows immediately.

A related statement about Fibonacci numbers (where the integers a and b are replaced with irrational algebraic integers, and an extra factor of √5 slips in) is known as Carmichael’s theorem. Zsigmondy’s theorem and Carmichael’s theorem can be mutually generalised to other Lucas sequences.