There was a solar eclipse today.

Certain regions (including the Faroe Islands, familiar to anyone who has listened to the Shipping Forecast) landed in the umbra, experiencing a total eclipse. I was slightly less fortunate, landing in the penumbra (thereby only seeing a partial eclipse, which itself was largely obscured by cloud cover).

Pi day and the media

Since citizens of the United States feel the need to use Middle-Endian date formats (mm/dd/yy, instead of the standard yyyy-mm-dd format), and because sequences of digits can be interpreted as decimal digits irrespective of whether or not they actually are, the 14th March 2015 was proclaimed ‘pi day’. Consequently, after a 10.5-mile run, the founders of Oligomath baked a pie containing blackberries, blueberries and raspberries. Unfortunately we didn’t photograph the pie, so here’s a plan view of the run instead: 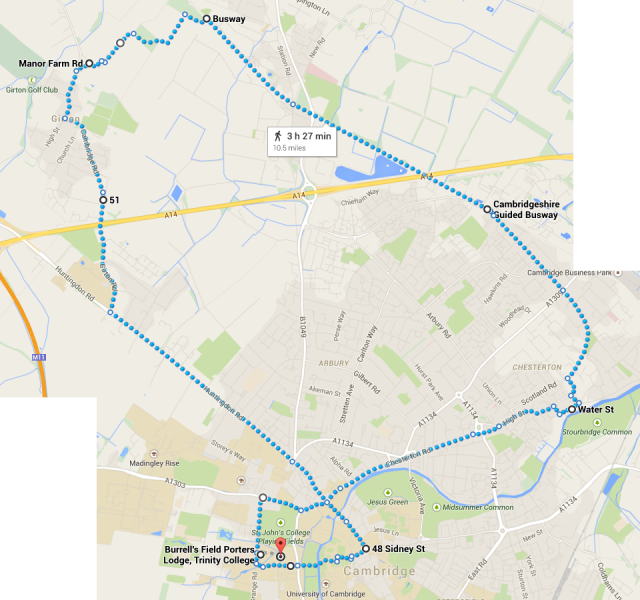 As one would expect, this has been covered in an extensive barrage of posts in the Aperiodical, including an ode* to constrained writing by Alex Bellos.

A sesquimonth ago, the same Alex Bellos invited me down to London to watch a media screening of X+Y. I then wrote a review for his Guardian column, attracting a similar amount of controversy as Noa Lessof-Gendler’s review of a particular coffee house in Cambridge. If you enjoyed the latter, you may also want to read her brother’s more positive synopsis of the Rado Graph.

Around the same time, I launched a distributed search I had been working on since August. It collects data from people running a particular Golly script to simulate millions of random initial seeds in a variety of cellular automata rules. It’s currently gathering around 8 * 10^9 objects per day, depending on how many machines are running the script, and has already found previously-undiscovered patterns. We’ve also had a few other surprises, such as these pairs of interacting spaceships at the bottom of this list: 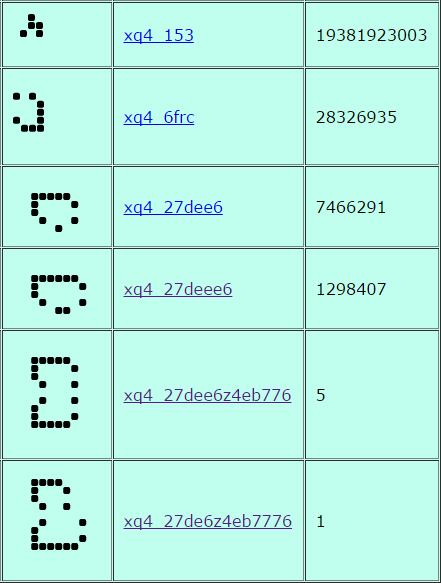 If you want to get involved, you can download the requisite software (Golly, Python, and the search script) from here. In order to maximise your machine’s potential, run one instance of the search program per CPU. For instance, if you have a quad-core computer, run four instances of Golly, each running the apgsearch script.

The script will prompt you for the number of soups to search between successive uploads (default: 5000000), the rule to use (default: B3/S23 = Conway’s Game of Life), and the seed symmetry (default: C1 = no symmetry). You can leave all of these parameters unchanged.